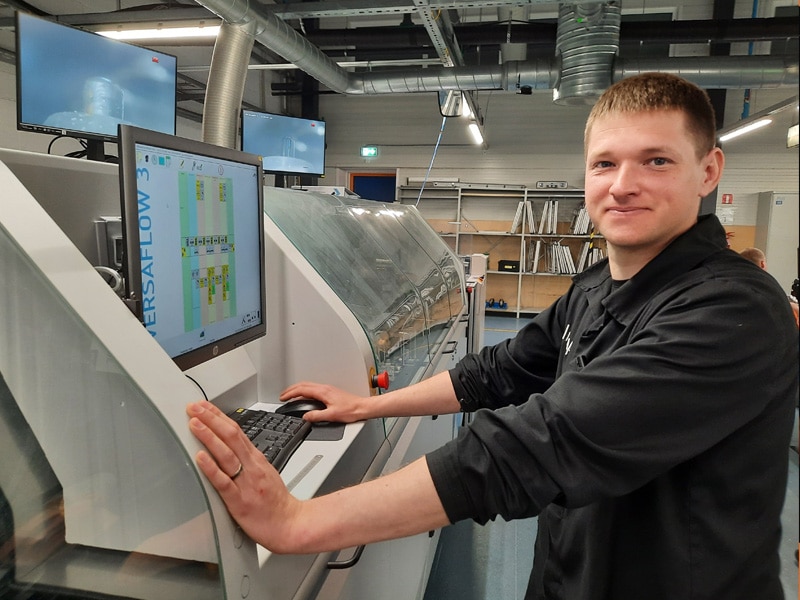 Let’s meet our team at Incap Estonia! Aadi Rahula is a process manager at our Kuressaare factory.

We are excited to introduce our team members from different factories and this time we are introducing Aadi from Estonia! As a process manager, he is responsible for improving processes, leading a team and quickly resolving issues and problems that arise in production. If necessary, he also contacts the customers or their technical support.

At the end of last week, Aadi attended a training course on managing people in production. During the two days, the nature of leadership, basic mistakes and the nature of the person were discussed. “The training was exciting, and I will definitely use what I learned in our production,” added Aadi.

Aadi grew up in Saaremaa and attended school there as well. After high school, he went to study electronic systems at the Kuressaare College of Tallinn University of Technology. “Since I was a child, I’ve enjoyed taking things apart to see how they work. It seemed logical to go to study electronics,” said Aadi. After the first year at the Kuressaare College, he came to Incap for an internship, and after the end of the internship, Aadi stayed at Incap to work there alongside his studies.

Aadi worked at Incap for about 5 years in various positions, such as assembler and production engineer. After Incap, he gained new experience and broadened his horizons as an engineer in other electronics companies in Saaremaa. “In 2020 I returned to Incap as a process engineer and soon after that I became a process manager,” Aadi recalled.

In addition to working at Incap, Aadi is also a volunteer rescuer. “When the national rescue brigade was closed in our area 10 years ago and a volunteer rescue brigade was established instead, I decided to join. I underwent appropriate training to participate in various rescue operations. There have been days when I have had to respond to a call at night. After that, I quickly went home to take a shower, eat breakfast and I still arrived at Incap on time,” said Aadi. In addition, Aadi likes to spend his free time with his family and when he has time, he also enjoys fishing.

We are happy to have Aadi in our team!

Incap Company Report by Inderes
07/29/2022
Go to Top
This website uses cookies and asks your personal data to enhance your browsing experience. By clicking “Accept All”, you consent to the use of ALL the cookies. However, you may visit "Cookie Settings" to provide a controlled consent.
Cookie SettingsAccept All
Manage consent